The Twelfth International Conference on Tangible, Embedded and Embodied Interactions (TEI) was held last March 18–21 in Stockholm, Sweden. TEI is a fantastic conference that engages multidisciplinary researchers and practitioners in engineering, social sciences and the arts by means of tangible systems and experiences. This year there was a special presence of e-textiles in the form of workshops, talks and demos, following the year’s theme of ‘Post-Digital Design’.

We presented our Work-in-Progress paper Embodied Interactions with E-Textiles and the Internet of Sounds for Performing Arts as a demo, a result of a collaboration between different projects at QMUL: e-textile research (Sophie Skach and Rebecca Stewart), the Internet of Musical Things (Luca Turchet and Mathieu Barthet), and Audio Commons (Mathieu Barthet, Ariane Stolfi and Anna Xambó). For this showcase, we turned textiles into soft and wearable musical interfaces using the Bela platform. Gestural movements or touch interactions allowed the wearer to explore the “Internet of Sounds” with different sonic features–ranging from drumming bellies to whistling sleeves. A hoodie with snapped-on fabric sensors served as an interactive sound playground for its wearers. Stretch sensors on elbows and a pressure sensor on the hood each had a special audio effect assigned. So by moving, stretching, bending, and hitting, wearers could apply reverb, delay and a frequency shifter to modify the garment’s sound base. The sound itself could be downloaded and even self composed through a specifically developed network app, that was linked with the micro controller deployed on the hoodie.

We obtained positive and encouraging feedback from the visitors: “Very cool! I love how natural it is to move and generate sound!” “So much fun! I could really feel the performative potential when wearing it. Cool!” “I like the design of the cloth. Would like to see real performance,” “Let me see an actual performance with this! love it!,” “Would love to have some more varied sounds -> to see or experience what matches to what! But fun project!,” “Great experience! I’m not so much of an audio guy but this is great. I want this to be collaborative!”

In a nutshell, visitors had fun and expect to see a follow up of the garments in a performance setting. It made a difference that they could wear it and experience it. However, we identified that the hoodie should add a bypass effect so that the original sound can be heard. Other improvements include the time of uploading the sounds from the Internet (now it could take up to a minute!). The stretching sensors of the hoodie were dominating too much in the overall soundscape, which should be polished. The effects were centred in the high-frequencies, we aim to provide more dynamics in future iterations. 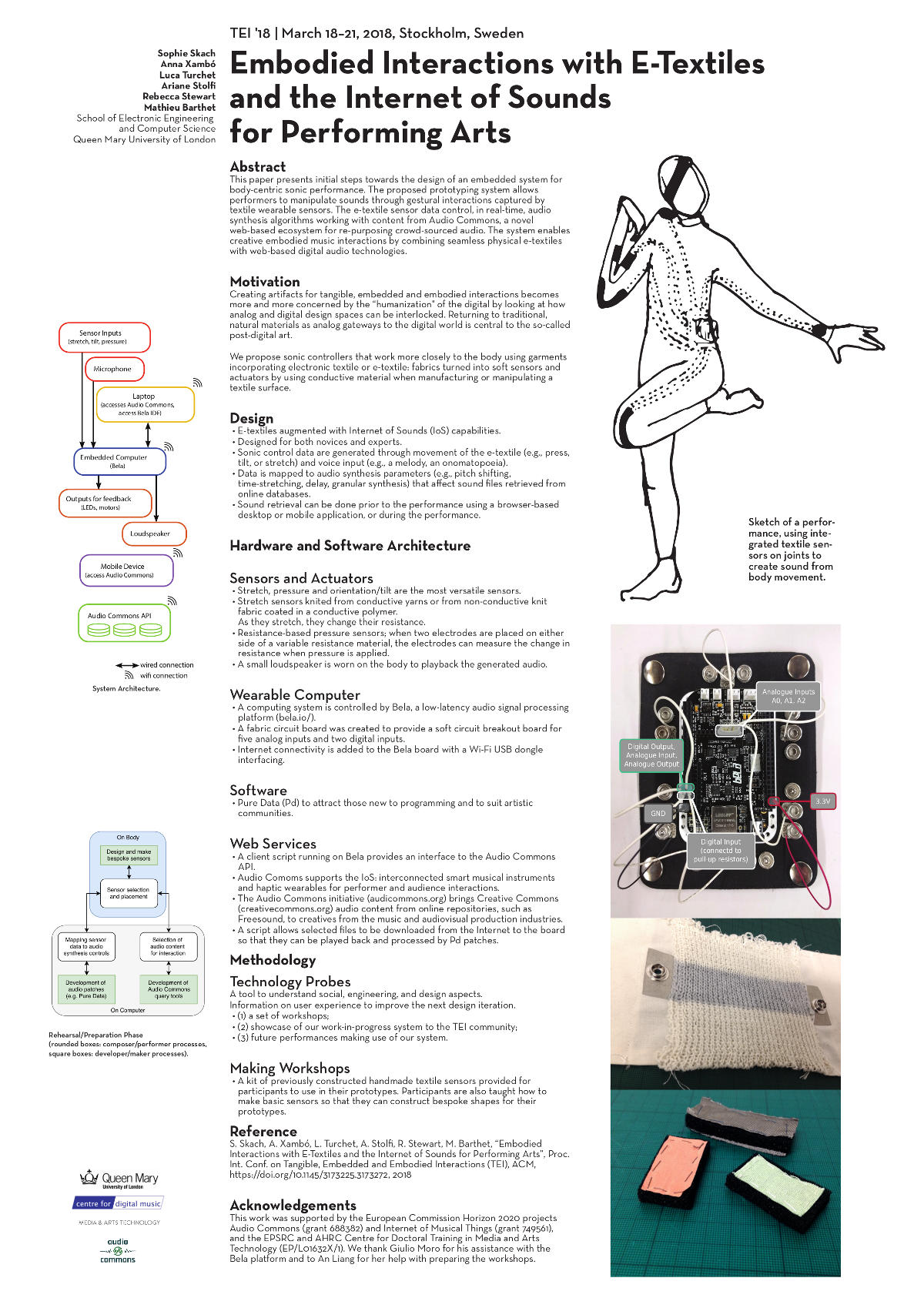