The MoodScape Generator has 3 sliders that help to determine the mood of the soundscape. There is one slider for valence (how positive/negative the mood is), one for arousal (how calm/excited the mood is), and one for dominance (the domination of the mood). The user can select a value between 1 and 10 for each of the three mood characteristics using the sliders. Once the search button is hit, a list of words that are closest to the values selected on the sliders, are displayed. 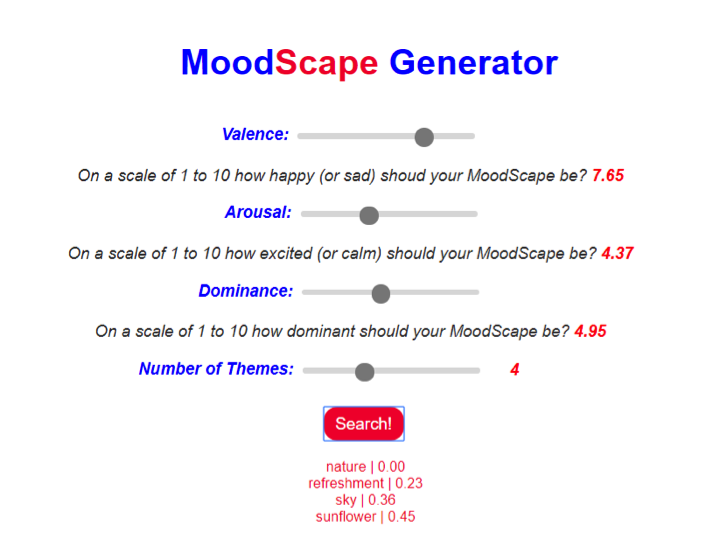 There is also a number-of-themes slider that the user can control to select the number of words they want to be displayed after the search. The words that are displayed are clickable. Clicking on a word will retrieve all the sounds that are related to that tag from Freesound and play them together to create the soundscape.

The closest words are those displayed on the screen based on the user input. When the user clicks on any of the words, the selected word is passed as an argument to the Freesound API. All related sounds are retrieved and played together to create a soundscape with that specific theme.

A user study was conducted among 8 participants. For this user study, the aim was to compare two different versions of the MoodScape Generator. The user study compared an earlier, simpler version which includes two search boxes, and a more advanced and richer version which includes four sliders. The idea was to understand how non-musicians, novices and musicians with an intermediate skill level infer the different user interfaces and which version of the tool produces a relatable output.

The study revealed that the MoodScape Generator with the two search boxes was rated with a higher score of usability. This was because most of the users were beginners and took long before they could understand the functionalities of the sliders. The MoodScape Generator with sliders was given a high score for creativity enhancement. Participants agreed that this tool enabled them to explore creative ideas and that there were close matches between the parameters selected and the mood that the soundscape carried.

The MoodScape Generator has taken a decent shape over the course of this project. However, there is room for further enhancement. A significant area is the implementation of content-based search. Implementing content-based searching will provide more nuanced options to the user. The sounds retrieved can be filtered upon a specific pitch, or key so that when many sounds are played together, they would sound more consonant than in the current version. The next area of work would be to provide the user with functionalities to record, download and join a soundscape of one theme with another.