Audio Commons is built on Creative Commons (CC), a licencing framework that makes it possible for producers and creators of content to give away some of their copyrights. Depending on the type of CC licence one uses, it enables for example the redistribution and transformation of one’s work by other content users and creators. By publishing audio content under CC licences, the creation, sharing and usage of that content does not simply stop to the point where it is created, but helps the content to live on and redevelop and recreate itself further. This can happen in multiple ways across multiple audiences, and all this without forgetting from where and by whom it all began.

Although extremely useful, it can sometimes be difficult to know which CC licence to use and in what situation. As shown in the image below, different CC licences vary regarding the freedom allowed for the re-use of content. The most permissive of these licences (CC0) basically states that no rights are reserved and the audio can be used as pleased, even selling is allowed. On the other end of the spectrum, licence like CC-BY-NC-ND says that this is a Creative Commons licence (CC), credit must be given (BY), the audio cannot be used for commercial purposes (NC) and it cannot be transformed or remixed (ND). 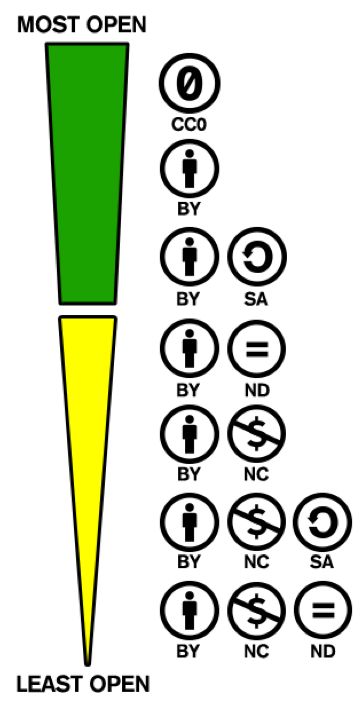 The following list summarises the characteristics of the individual CC license types:

As one can see from the image and the descriptions above, the CC licence one chooses is in most cases a combination of licence types BY, SA, ND and NC, depending on the interests of the author. Creative Commons also has an online tool that makes it relatively easy to decide which licence works for your content. For example, imagine a sound artist called Katie who has a created a groovy drum beat and wants to allow other people make use of the sound. By choosing the licence CC-BY-SA-NC, she basically states that she wants to get credited for her sound, people that remix her sound have to distribute the remixed sound under the same licence as her original sound, and that her sound cannot be used for commercial purposes. If she did not want people to remix her sound at all, she would choose the licence CC-BY-ND-NC. On the other hand, if she only wants to get credited for her sound but places no other restrictions of use, the licence CC-BY will do just that.

Overall, when using other people’s audio licenced under CC licences, it is important to remember that the new content cannot give additional rights that the author of the original audio does not allow. As an example, re-using audio licenced under BY means that the new content cannot be licenced under CC0. Had Katie for example used for her sound someone else’s content licenced CC-BY, she cannot release her creation under the licence type CC0 as that would remove the need for giving credit depicted in the licence of the sound Katie used when creating hers. The table below gives additional examples on what licences can be adopted when re-using CC licenced content.

Let’s say that a user B adds a new sound of her own that includes/modifies/remixes a sound from another user A, then:

Apart from CC0, all CC licences have the requirement to give credit for the authors of the contents used (that is the BY license component). Giving credit to an author is easy, basically it is a line of text in the content description or in the end of a movie. In practice, giving credits can look something like this:

If several audios are used and giving credits ends up in a long list while there is limited space, this list can in some instances even be behind a link:

To conclude, here are some real examples on how giving credit is done: